Environmental respect. We learned that the value of earth lies in its biodiversity, in the ability of the environment to adapt again and again to life conditions , that have continually evolved through the geological eras and continue to evolve also today.
In history, the farmer has always worked the land, applying his intelligence to the use of natural resources to the benefit of human species through specialization of cultures. The plow invention made it possible to bury the weeds in order to allow the most useful plants to grow on the surface. But limitation of weeds reduces the biodiversity of that field, specializing its production to the advantage of the human species.
The game is not to offend nature too much, because this would cause long-term damage for all living species. And the concept of environmental respect lies in balance between the benefit for man in short and very long term.

The farmer, the tree and the vineyard. The old farmer knew that the life of his tree was much longer than his. He worked hard to grow it beautiful and robust. He didn’t do that thinking of his children and grandchildren, but for himself. In the tree he saw the mirror of his face, and if the tree was healthy he felt healthy himself.
Also the vineyard was his environment. He already planted one long time ago, and 30 years later another one on the same land. It had always borne good fruit and lived with him the good and bad seasons, with sun, frost and storms. The farmer has been taking care of his vineyard personally or had it treated by others, and the vineyard has lived a life of her own, like a stable and affectionate companion ……… 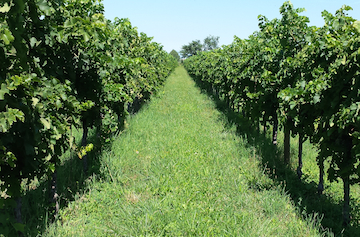 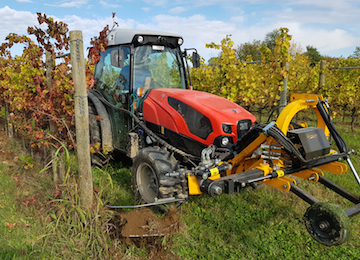 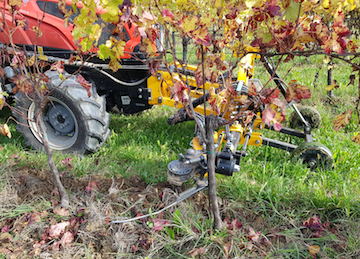 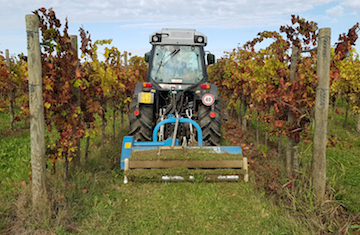 Vineyard cultivation
First step is not to use herbicides (glyphosate) and to cover with grass the vineyards after the third year of age. The weeds in the sub-rows are treated with a re-entry blade cutting their roots, grass in the inter-row is simply cut and left on spot to replenish the soil with nitrogen supply. Phosphorus, responsible for plant’s lignification, is recycled, leaving the shoots in place after pruning at winter. Potassium, responsible of grapes ripening, is partially returned to earth by spreading in the fields the marc after harvest and the wine lees discarded from the cellar.
Every four to five years a chemical analysis will identify any deficiencies of the soil, that will be reintegrated with organic fertilizers or nutrients. microelements.

Voluntary integrated and certified environmental protection protocol ( SQNPI).
Today, roses as sentinel of vineyard diseases are no longer useful, as detailed forecast of diseases attacks are available on Internet area-by-area. These sites precisely indicate if, when and how treatments are to be carried out, for each type of protocol of environmental respect: normal, integrated or organic.
We chose the integrated one, officially monitored by an external body on the basis of in- house registers and through sampling at the end of the year on grapes and leaves, to chemically certify the absence of any harmful or unplanned substance.
In addition, also cellar practices are inspected, to give wines the SQNPI (National Integrated Production System) Quality Certificate, for a limited and targeted use of products in the vineyards and correct operations in the fields and the cellar, aiming at leaving the natural balances as intact as possible.

Antagonist insects and biological control.
Excluding control against Scafoideus Titanus, a vector insect of the fearsome Golden Flavescence virus, for which the use of a particular insecticide is mandatory by low, insects are now being fought with biological weapons, such as antagonistic insects, sterilization of females or chemically modified insect hormones, that alter their behavior.
It has sometimes happened that the importation of an allochthonous insect has greatly damaged the natural balance even of large areas. This is the recent case of a bug called Halyomerppha Halys, which is devastating fruit crops and creating enormous disturbance to humans. Being a large insect, it is not susceptible to decisive treatments, too harmful for the whole environment. Recently an antagonist insect was found in Japan, the Samurai Bee, laying its eggs inside those of Halyomerppha Halys, killing them.
Experiments to introduce this bee are underway, in order to create a better equilibrium with environmental recpect, like in the Far East.
It is interesting to note that, in a totally autochthonous environment, twenty years ago the excessive presence of the Red Spider, an herbivore over-spread in the vineyards due to an excessive use of undifferentiated insecticides, has been fully rebalanced. Lighter insecticides were used together with sterilizers of Red Spider females. Under these conditions, the Black Spider, a carnivore happy to eat Red Spiders, was able to rebalance the situation with its appetite. Similarly, thanks to Samurai Bee there are now good hopes to reduce the devastating presence of Halyomerppha Halys.

Other elements of ecological management.
In Friuli groundwater is abundant, at a constant temperature around 13° Celtius. With this water, we naturally condition our cellars, tanks and warehouses, returning the water to the soil through a closed circuit, exploiting this way its natural thermal energy.

Environmental respect is a continuously evolving concept, also following the development of technology and regulations. Therefore, a natural dynamic equilibrium in agriculture is a complex subject, especially as man, as always done so far, will continue to manipulate the other species to his own advantage. Therefore, the best quality control inevitably lies on the producer’s  knowledge and consciousness, meaning a constructive and clean relationship with nature and a constant attention to the production of genuine food.